I stumble Into being a Good Parent while at Disneyworld 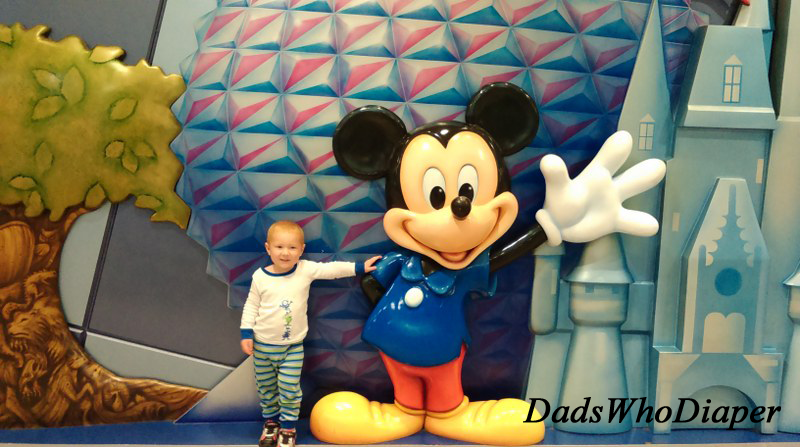 A fun picture at the airport

My family and I just returned from an awesome two week trip where we visited Disneyworld and took a Disneycruise.

I’m going to share posts on both of those soon, (be forewarned my family LOVED the cruise and any review I do will end up sounding like an ad), but right now I want to talk about a parenting moment I had while at Disneyworld. I think it really shines a light on how big a role dads play when it comes to molding the person our children become.

After a fun lunch at the Wilderness Lodge my wife slipped off to enjoy some alone time in the parks while I was in charge of getting my son back to the hotel room for a nap. In the always great game of Quick He Is about to Start Melting Down I needed to drag my half asleep two year old on a boat back to the Magic Kingdom and then on a bus back to our hotel before he fully hit the wall and decided to make a scene. 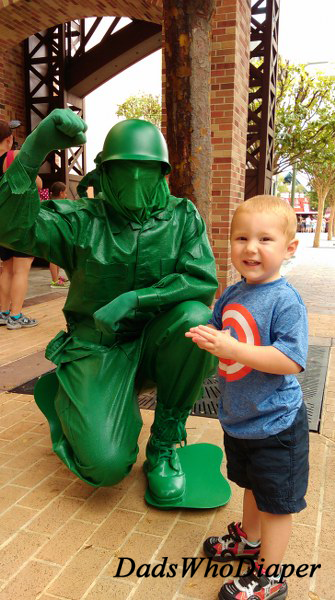 As the boat started to board I noticed a young woman to my left, all alone, attempting to lift two diaper bags and her infant all while trying to fold her stroller. I quickly seated my son on the boat and jumped back off to help this visually half panicked mom fold and load her stroller. Helping her didn’t take but 30 seconds and before he was even able to start thinking about creating trouble I was back seated next to my son.

This is the conversation that followed immediately after:

HIM: “Why did you help that lady?” (Are you picking up on the theme here?)

ME: “Because the world needs people to be better neighbors to each other.”

ME: “Because it would be a better place.”

The rest of the trip back to the hotel wrapped up normally enough (but remind me to tell you about the time he peed on the Animal Kingdom safari jeep) and I got him off to nap at a reasonable time.

Related: Save Your Hobbies By Including Your Kids

Flash forward three and a half days.

After spending an early morning beating a path around EPCOT, so my son can both congratulate Mulan for defeating the Huns and ask him and Jasmine where Abu is? We head for the exit so we can try and get him back to hotel at a reasonable time for a nap. Don’t worry, we end up losing those parenting points by just skipping nap the last two days and staying in the parks. 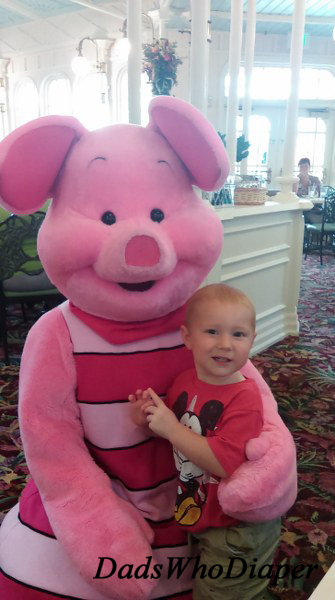 Is my son flashing a weird gang sign next to Piglet?

As we exited the park and started to leave the gate I noticed the smallest member of my tribe had stopped walking. I asked him what he was doing and he said he wanted to hold the gate open for “that lady” and pointed to a woman walking behind us pushing a stroller.

After the woman passed through the gate held open by my son he said the greatest words, “I want to be a good neighbor like you dad.”

I think it’s the small things like this that really helps to remind me what kind of role model we are to our children. While I’m not a perfect dad, it is nice to see my son becoming a good person and to know I played a small part in it. 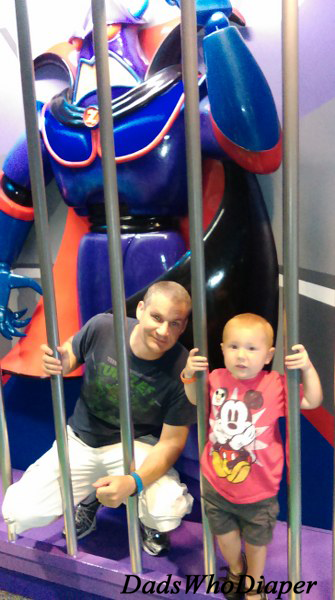 It might have been easier for him to fit between the bars than myself.